What's the connection between emergence and emergency? Today at ACMI - what a wonderful place - I saw this sign: 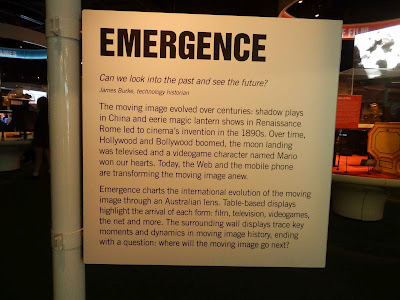 When I first noticed the sign, I thought it said emergency. And that, of course, got me wondering how these two words are related. After a search on the Net, I'm still not quite sure. At SciForums there was a discussion about the relationship of the two words, but it was fairly inconclusive, in my opionion. However, one person did say this:


I find Dictionary.com to be as good an etymological reference as anything else that's available for free, if only because it usually lists more than one. Unfortunately all the etymologies for "emergency" refer back to "emerge," which IMHO does not do justice to the word's modern usage. It has moved far away from the origin of the emergency, i.e., "something that comes out of something else," and is now all about the appropriate response, i.e., "We gotta do something pretty dadgum quick or we'll be real sorry." That said, "emerge" does not mean exclusively "to come out of (something else)." It means, more generally, to arise, to develop, to come into existence. The notion of requiring an immediate response is a more recent accretion to the definition of "emergency," which makes a rift between that word and the word it was built from. This is hardly unusual in our language or any other.

Another said of the word emergency that it's :


a well-known medical adage: Someone bleeding [unexpectedly] from an orifice (ears, eyes, nose, mouth, navel, urethral orifice, anus, etc) should seek medical attention immediately. For example, someone in a car accident says s/he is okay, but is bleeding from his/her ears. This person should seek medical attention immediately. The etymology of emergency is from something "emerging" -- the same idea as something "cropping up" -- it is something that appears unexpectedly. It's the unexpected. The word seems to have taken on a pejorative sense.

The definition I find the most helpful comes from The Free Dictionary:

As I was reading the introduction to The Granta Book of the African Short Story, I did a double-take at this sentence from literary critic Paul Zeleza's essay 'Colonial Fictions: Memory and History in Yvonne Vera's Imagination':


This generation incorporated in their literary imaginations disdain for colonialism and distrust of nationalism that had animated earlier generations of writers who bemoaned the cultural agonies of colonialism and the aborted dreams of uhuru.

Bemoan Uhura?  No way! Lieutenant Uhura? Who could forget her calm handling of any crisis on Starship Enterprise?

And then I noticed it was uhuru, lower-case, no letter A on the end. Looked like a chance to learn yet another new word. And where better to check it out than on a Star Trek site, with a quote from Spock, that compendium of all useful information? He said: 'And Uhura, whose name means freedom.'

Once I set off around the Net to research the word uhuru, I was overwhelmed by the wealth of sites devoted to it. If, like me, you are unfamiliar with the historical and societal implications of this movement, just search the term.
Posted by parlance at 10:30 2 comments:

African short stories and the Internet

As I browsed the Melbourne City Library recently, I saw a book facing out, probably placed by a librarian who recommended it. The book was The Granta Book of the African Short Story. That sure looked interesting, but I didn't want to carry a book on public transport because I had my hands full already.

Next day, I wandered into my local library, and there, facing out on the 'recent returns and new books' display, was the same book. Obviously I was meant to borrow it.

So I'm reading it.

In the introduction, Helon Habila says:


With the coming of the Internet to many parts of urban Africa in the late 1990s, a new avenue for publishing was discovered and the African short story finally began to get its long-overdue moment of recognition. [This follows a discussion of the emphasis on novels at the expense of short stories.] The traditional publishing landscape, with its excessive restrictions, was suddenly superseded. The Internet is today doing what the newspapers and magazines did to the development of the short story in Europe and America at the start of the industrial age. It is worth pointing out that the Internet, due to its own peculiar restrictions, seems actually to favour short stories over novels, thereby reversing the restrictions that traditional publishing had placed on African fiction.


Food for thought. Is the Internet giving the short story new life everywhere in the world? I hope so.

In my opinion, eReaders also favour short stories. It seems ages since I bought a BeBook Neo. I didn't use it for a long time, until I had the bright idea of transferring to it the stories I download from my subscription to Beneath Ceaseless Skies. Now I can sit comfortably at the table with my eReader propped up on my Book Seat, or lie in bed and take in a short fantasy or sci-fi story.

Posted by parlance at 09:30 No comments:

In researching yesterday's post  about the word sidespies, coined by Dylan Thomas in his radio play Under Milkwood,  I came across a page on a site called WordSpy where Paul McFedries posts neologisms he has coined. He invented the expression squirrel gardening:

squirrel gardening, adj.
The accidental "gardening" that occurs when squirrels transfer seeds and bulbs from one one part of a garden to another, or even between gardens.

This word wouldn't work for us in Australia, but I think we have a synonym, bowerbird gardening.

Here's a link to an article about male bowerbirds in Oceania 'accidentally' growing plants when they build their intricate bowers  to attract a mate.
Posted by parlance at 15:10 2 comments:

birth of a neologism

I've never read Dylan Thomas' Under Milkwood, but recently I came across an extract from it and fell in love with one word - sidespies. Where has this expression been all my life? (Hiding in an unread book, obviously.)

Since I saw the word, I often want to use it, because it so exactly expresses a certain look that side glance doesn't even come close to defining.

But is it mine to use? If I were to use it in my own writing, would I be a plagiarist? When does a word become common property? When is a neologism available for use? Macquarie Online Dictionary defines a neologism:

2. the introduction or use of new words, or new senses of words.

By the way, Macquarie doesn't have sidespy, and neither did any online dictionary I looked at. The only place I came across an online reference to the word is on a thread at Wordreference.com.

We all use many words coined by Shakespeare. I think it's time to get Thomas' great little verb out into the general world.

Here's the extract I read:

In the blind-drawn dark dining-room of School House, dusty
and echoing as a dining-room in a vault, Mr and Mrs Pugh
are silent over cold grey cottage pie. Mr Pugh reads, as
he forks the shroud meat in, from Lives of the Great
Poisoners. He has bound a plain brown-paper cover round
the book. Slyly, between slow mouthfuls, he sidespies up
at Mrs Pugh, poisons her with his eye, then goes on
reading. He underlines certain passages and smiles in
secret.

Persons with manners do not read at table,

says Mrs Pugh. She swallows a digestive tablet as big as a
horse-pill, washing it down with clouded peasoup water.

Some persons were brought up in pigsties.

Bitterly she flicks dust from the broken cruet. It settles
on the pie in a thin gnat-rain.

I know one who can.

Alone in the hissing laboratory of his wishes, Mr Pugh
minces among bad vats and jeroboams, tiptoes through
spinneys of murdering herbs, agony dancing in his
crucibles, and mixes especially for Mrs Pugh a venomous
porridge unknown to toxicologists which will scald and
viper through her until her ears fall off like figs, her
toes grow big and black as balloons, and steam comes
screaming out of her navel.

says Mr Pugh, and quick as a flash he ducks her in rat
soup.

What's that book by your trough, Mr Pugh?

It's a theological work, my dear. Lives of the Great
Saints.

Mrs Pugh smiles. An icicle forms in the cold air of the
dining-vault.


Isn't it fantastic? I shiver just reading it.

If you want to read Under Milkwood, you can legally download it here for free.
Posted by parlance at 14:45 No comments:

pareidolia - a word for a common human activity

Last week I was looking at pictures taken by my photography class, and one person showed a shot of some rocks in a pond. The rocks looked like frogs, and we talked about whether we like to 'name' natural features by how they look to us. Some like it, some don't.

I don't find that walking around a beautiful natural place and classifying everything by some arbitrary human-based attribute is a useful exercise, probably because I often can't see what I'm 'supposed' to see. I've sometimes thought this naming of geographical features is like our anthropomorphising of animals.

The Macquarie Dictionary says of anthropomorphise:

So I guess if I say a rock looks like a frog, I could be anthropomorphising. But I must confess that this word didn't really describe the phenomenon for me.

But now I've learned a new word, from Slavenka's blog - pareidolia - which she defines as 'a psychological phenomenon where human brains see familiar objects in random shapes'.

In looking for the word on the internet I came across a Flickr site devoted to pareidolia, and so far my favorite is this one.