As I walked up the stairs in the Melbourne City Library today, I came across an exhibition about the 400th year celebration of the King James version of the Christian Bible.

After tomorrow it moves to Brisbane.

The first section to draw my attention sat below a poster with a picture of Shakespeare. 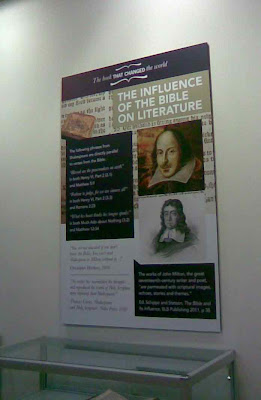 It claimed this version of the Bible has influenced our modern English language even more than Shakespeare did. 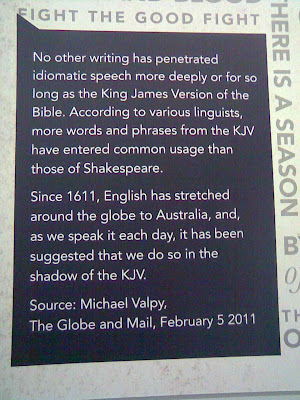 The role of missionaries in studying and preserving languages around the world is a complex one. Nicholas Evans, in his book Dying Words, launched in Melbourne two years ago, says:

The idea of learning and committing to writing the languages of other, less militarily powerful peoples did not appear until Christianity, with its early urges to proselytize other people in languages they would understand...Ingenious new scripts, developed by polyglot priests for their own languages, quickly launched their traditions of religious translation, later to be followed by other forms of literature...
As would happen again and again in colonial encounters around the world, the partial official tolerance of indigenous languages and cultures did not last long.

Here's one of the short movies available at the online version of the Exhibition:

It was great to hear on this video clip that indigenous communities are taking matters into their own hands and translating the Bible into their own languages. I assume it isn't just the Bible that's being translated, of course.I assume that there would be other literature made available for people who speak an indigenous language.
Posted by parlance at 22:09 2 comments:

Last week I had a quinsy.

Well, I probably didn't have a full-blown case of quinsy, because that would involve 'a severe sore throat', and mine wasn't too bad. Annoying and inconvenient, though. 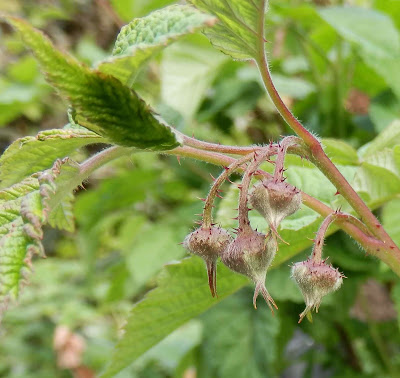 Currants were often used in the past as a cure for quinsy. If I'd known about that perhaps I'd have drunk black currant juice each day, instead of lemon and honey drinks, and spared myself the sore stomach this week.

Curiosity about the word's origin sent me to the Net, and I discovered that, like the word cynic, it comes from the old Greek word for dog. The Online Etymology Dictionary says:

As I said on my dog blog, I only have to see my dog straining at the lead when she sees something interesting ahead of us, to visualise a sore throat as a strangling collar. Observing the way she gargles and gags, I suspect she does at times give herself a temporary quinsy.
Posted by parlance at 15:55 No comments:

sawflies and the origin of the word 'clue'

Walking in Darebin Parklands today, my companions and I noticed a crowd of sawfly larvae crawling across the path. I took a photo, but didn't try to get a good one, because it didn't occur to me that I would want to post it here on my word blog... 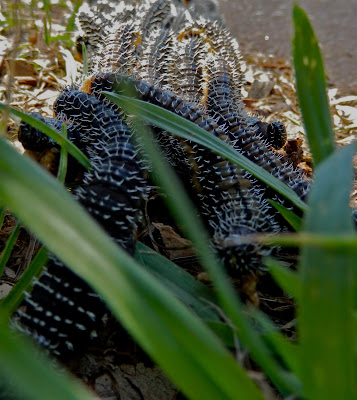 The larvae were clumped together, but not in a ball, as they are often seen. I presume they were more spread out because they were headed across the path. There's a better photo here, at the South Australian Government Forestry site, showing them in a ball on a tree.

Later in the day, I happened to say I didn't have a clue about something, and I wondered where the word clue comes from. I seem to recall reading it spelled clew in an old Sherlock Holmes novel.

The Phrase Finder explains that, although the word clue today means 'an insight or an idea that points us to a solution',

a clue (also spelled clew) previously had a different meaning - a globular ball formed from coiling worms or the like [my emphasis] or, more specifically, a ball of thread. Clew has been used with that meaning for at least a thousand years and citations of it in Old English date back to 897AD, when no less an author than Aelfred, King of Wessex used it in his West-Saxon translation of Gregory's Pastoral Care. Shakespeare also used the word with the 'thread' meaning, for example, in All's Well that Ends Well, 1602:

"If it be so, you have wound a goodly clewe."

Phrase Finder goes on to explain that the modern meaning came from the ancient Greek tale in which Theseus used a ball of thread to find the way out of the Minotaur's labyrinth.

At Lowchens Australia there's a list of collective nouns for animals, and for worms it has 'a clew of worms'. (I wonder why a dog-related site has this list.)

SheilaMatilda posted a photo of a clew of earthworms seen in her compost bin. Now I'll know the correct term when I come across one in my compost heap.
Posted by parlance at 22:46 3 comments: