Yesterday must have been my day for stopping in my tracks when I saw horrible English on real estate advertisements. I've already posted about one in Heidelberg.

Here's a photo of a sign on a new development in the Ivanhoe shopping strip: 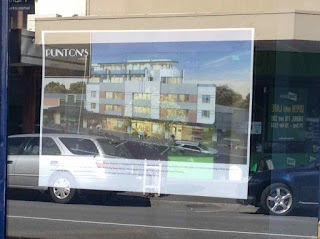 And a closeup so you can read some of it: 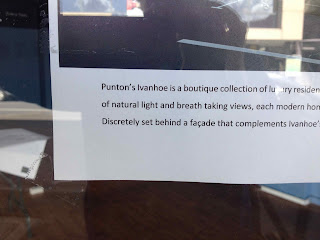 The residences will be discretely set behind a facade.

adjective 1. detached from others; separate; distinct               2. consisting of or characterised by distinct or individual parts; discontinuous.

Given that it's a multi-storey development, it's amusing to visualise a series of disconnected residences. Sounds as if it will have to defy gravity. Maybe a development for the twenty-second century?
Did the writer perhaps mean the development will be discreetly set behind a facade of shops at ground level?
Posted by parlance at 18:23 No comments:

this is NOT English

Here's a sign in Heidelberg. The terrible prose doesn't fill the reader with confidence that the development will be of a high quality. 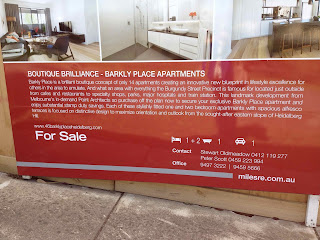 If you're going to spend money on a fancy sign, why not pay someone to edit your prose?
Posted by parlance at 22:59 No comments: