more about the origin of the word 'kangaroo'

Following a link on the 6Ablog, I found an informative little video clip about the word kangaroo.
A discussion on a forum called QI also has information about this word's origin. Judy Bennett says:


Lieutenant James Cook beached his 'HM Bark Endeavour' in what is now Cooktown, in 1770 having damaged his ship on the Great Barrier Reef. He remained in the area for nearly seven weeks. The word 'kangaroo' was first recorded in the ships' journals during this time, and the animal was also drawn by Sidney Parkinson. The journals are held at the James Cook Museum in Cooktown. The first sighting of the animal was on June 24th 1770. They tried to shoot one for quite some time, finally Lieut. John Gore succeeding on July 14th. It was eaten at supper the following day.

I've posted about this word previously.
Posted by parlance at 15:19 3 comments:

As I walked along Trenerry Crescent in Abbotsford today, I was struck by the powerful message on this display board. 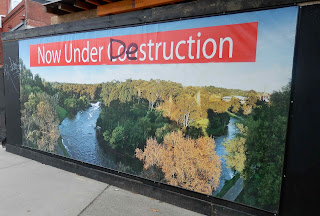 Somebody is angry about the development on the riverside and simply by overwriting the prefix 'con' with 'de' they've made their point.

It was rather amusing to continue along from the construction/destruction site and see that nature hasn't been entirely forgotten in this street. There's fake grass, 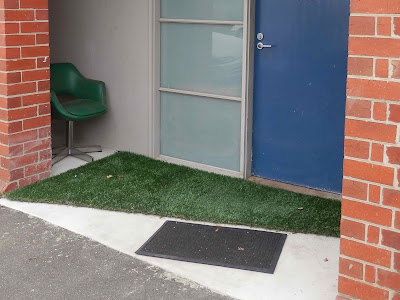 and even a living plant, 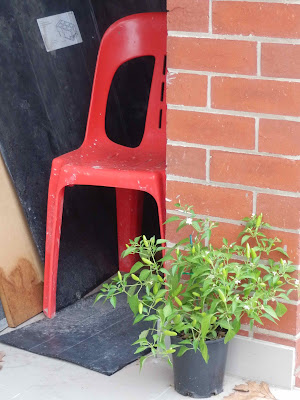 and the plane trees are fighting the good fight to remind us nature is rarely tidy. 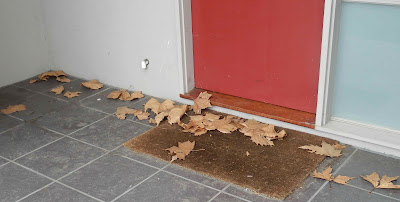 This evening I watched the first episode of Randling. In one segment, contestants were asked to make up a word for a concept that lacks a name in English. I enjoyed hearing their suggestions, some silly, some beautifully apt - especially the segment about the look on the face of someone who finds herself in public without a poo-bag when her dog has just defecated. In my opinion, you could tell which contestants were dog owners (as I am).

On the other hand, sometimes I think there is no word in English for a concept, and I find I'm mistaken. I didn't know English had a word to describe a pattern of stars that is not a constellation - asterism. I came across the word from a link on Coyote Prime's blog.

This is going to be a useful word to me, because here in the Southern Hemisphere we tend to notice a part of Orion that looks like a pot. Now I'll be able to call it an asterism.

Here's a blog entry by a visitor from the Northern Hemisphere:


The New Zealanders see an asterism in Orion called the "Iron Pot" where Orion's "sword" is the pot's handle and the stars of Orion's Belt are three burners under the pot. It really does look like that from that perspective. Also, the brightest star Sirius is at Orion's upper right instead of the lower left as we see here in Cleveland.