more about the word misogyny

Further to yesterday's post about misogyny, misanthropism and misandry, I've noticed an article in The Sydney Morning Herald reporting that, since our Prime Minister's recent speech about misogyny, there are moves afoot to refine the meaning to reflect its modern usage.

The Macquarie Dictionary has announced it is broadening the definition of the word "misogyny".
As it stands, the reference book says misogyny is a hatred of women, the kind that's pathological.
But editor Sue Butler says it's time that changed to reflect what Ms Gillard really meant last week when she accused Opposition Leader Tony Abbott of sexism and misogyny during a speech to parliament.
Not that he needs a session on the psychiatrist's couch, but that he merely has an "entrenched prejudice against women".
That will be the official second definition in the next updated edition of the dictionary.
"We decided that we had the basic definition, hatred of women, but that's not how misogyny has been used for about the last 20, 30 years, particularly in feminist language," Ms Butler told ABC radio on Wednesday.
"Sexist does seem to be moving towards this description of surface features and misogynist applies to the underlying attitude."
It was the underlying prejudice that gave rise to these instances of sexism, Ms Butler said.
Misogyny was like sexism, with a "stronger edge to it".

This afternoon I asked a group of teenagers whether they had noticed any new words this week. I pointed out that a love of words would be very useful if they aim to improve their essay writing - which I assume they do, seeing they were spending a lovely sunny afternoon in an essay-writing class.

One student mentioned a word he'd heard bandied about in the world of Australian politics - 'Miss... miso... something like that,' he said.

One of the boys frowned. He leaned forward, a mystified look on his face and asked how could a person, being human, hate humanity.

That's something to make me think. I did explain that it could be just a preference for the way other species deal with life, or it could be a dislike of humanity's actions, rather than outright hatred. But it's still a great question.

Another boy asked why anyone would hate women. Another very good question. One I couldn't answer. In an attempt to balance the discussion, I attempted to add 'hatred of men' to the list, but I'd forgotten what the word is.

I've looked it up now. The Merriam-Webster gives the word misandry. There's a discussion amongst commenters that this word is generally not known, compared to the almost universal understanding of misogyny.

Because I love words, I have swag of writers' blogs marked in my Google Reader. One of them is having a competition for Halloween. Just by telling the author your favorite horror creature, you might be able to win a copy of this suitably scary anthology. (Here's hoping it was permitted to pinch the image from the blog.)


Just leave a comment naming your favourite or most unfavourite, real or made up, living or undead, horror creature. One word will do it, although feel free to wax lyrical on why you like, or despise, your chosen subject. Please, keep it nice though, or you will be deleted. You don't have to come up with a little known subspecies of Mesopotamian werewolf or an obscure Aztec revenant who haunts the world for all eternity. A bog standard comment like 'I rooly trooly heart zombz' will do, even if many others have already written this. You can even be specific and name names if you prefer e.g Dracula. Don't sweat it, just participate, then cross your fingers.


Head on over to Gitte Christensen's blog if you want to try your luck.
Posted by parlance at 07:59 5 comments:

It's interesting to observe a word changing its spelling. I think sooner or later we'll be spelling than as then.

On Sunday morning I was listening on my car radio to The Big Backyard, a gardening program. I might have misheard, but it seemed the presenter (I think her name was Millie) said 'then' in a sentence where I would have expected 'than'.

This is the first time I've noticed this usage in speech, and maybe I misheard.

However, it's quite a frequent written transposition. For instance, when I was at the Royal Melbourne Show recently, I say this sign: 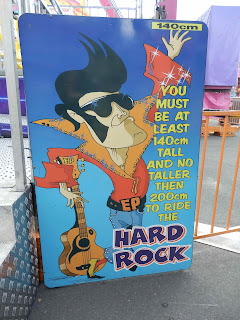 Daily Writing Tips, like many other internet sites, explains the difference between the two words. Basically, 'then' is used for time-related concepts and 'than' for comparisons.

But... this video clip from the Merriam Webster Dictionary puts the cat amongst the pigeons! Apparently they were previously spelled the same and it's a relatively modern practice to treat them differently. And 'than' can be used in some time-related concepts.

The Online Etymology Dictionary dates the differentiation from about 1770.

So I say, don't worry about it if you're confused. Just tell the critics you're a traditionalist and prefer the older spelling.