It nice of the writer of this sign to set a puzzle to entertain us as we shop.

If it's about one umbrella, we're left wondering what the umbrella possesses.

Perhaps the umbrella's handle was $19.99. Or maybe its spokes. 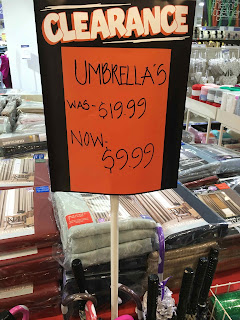 On the other hand, if there's a 'typo' and the sign is advertising umbrellas, we're left wondering what other single item used to be $19.99 and is now $9.99.

What a mystery.
Posted by parlance at 19:00 No comments:

Dickens and the origin of the word boredom

One of the many problems with the internet is that we can inadvertently perpetuate myths. It seems I've done this myself, in my post about the origin of the word boredom.

I'd been watching an episode of QI in which Stephen Fry said Charles Dickens coined the word.

I'm glad that I make no pretence about being an expert on language. I'm just a person who's interested in words. So I guess I don't have to be too embarrassed about my lack of proper research. (Of course, I'm a teensy bit red in the face.)

Paul Vargas has gone to original sources, having read texts where the word was in print in 1838, 1847 and 1844, amongst others. Those texts predate the supposed first use of it by Dickens in 1852. Vargas' blog post is well worth a read.


Charles Dickens is often given credit for inventing words that he was not the first to use. This is not surprising, if only because he was much more widely read than some of the people who had used these words before him. Dickens was also far more attuned to the language of the streets than were most of his contemporaries, and so his writing contains many examples of recently-invented terms. Writing in the Quarterly Review in 1839, Richard Ford refers to Dickens as the "regius professor of slang."


I'm grateful to Paul Vargas for alerting me to my error.
Posted by parlance at 23:01 No comments:

When a new pharmacy opened in my local shopping centre, I was interested to see the sign saying it was Australia's Cheapest Chemist. 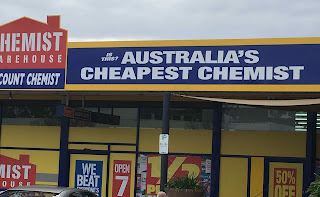 But wait a minute...

There's some tiny print on the sign - Is this?

Horrible punctuation, though - 'Is this? Australia's cheapest chemist.'

Who knows? I'm not going to find out, because I think a shop that indulges in such deplorable punctuation is best avoided.
Posted by parlance at 23:10 No comments: