when sadness is heavy upon our soul

The word sadiron landed in my inbox today as my daily mail from A Word a Day. The meaning of the word is


noun: a heavy flatiron pointed at both ends and having a detachable handle. And the etymology is 'From sad (obsolete senses of the word: heavy, solid) + iron Earliest documented use: 1759.


When I'm sad I do feel heavy, in every limb, so I can understand how this word came to have such a meaning.


sad (adj.) Old English saed "sated, full, having had one's fill (of food, drink, fighting, etc.), weary of," [and gives further detail in the full description of this word's history.] Sense development passed through the meaning "heavy, ponderous" (i.e. "full" mentally or physically), and "weary, tired of" before emerging c. 1300 as "unhappy." An alternative course would be through the common Middle English sense of "steadfast, firmly established, fixed" (as in sad-ware "tough pewter vessels") and "serious" to "grave". In the main modern sense, it replaced Old English unrot, negative of rot "cheerful, glad."


I wonder what other utensils are sad? Surely it's not just the irons and pewter vessels.


But one thing that people don't know about sadness is that it is silent. You can't spot it from a mile away, it could be right next to you as you read this. But it is not the be all and end all, you can overcome sadness, but first you have to be able to see it.


I agree. We need to keep our radar scanning for sad people around us, and also to check inside ourselves to see if we are dealing with our own sadness.
Posted by parlance at 19:48 2 comments:

I'm reading a book about plants and loving it. It lives up to the blurb inside the front cover:


From Ice Age cave art to cutting-edge research into how mimosas learn and remember, Mabey traces the history of our imaginative encounters with them [plants] - including his own. 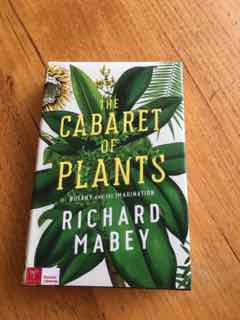 How could I resist such an intriguing invitation to deepen my understanding of the myriad species that share this planet?

On page 69 Mabey writes that under the ground, 'The roots and fungal tissues are as imbricated as if they were a single organism.'

I  understood the general idea of the sentence, but I just had to hurry to the internet to find out more about this interesting word imbricated.

Merriam Webster explains the history of the word imbricate:

The ancient Romans knew how to keep the interior of their villas dry when it rained. They covered their roofs with overlapping curved tiles so the "imber" (Latin for pelting rain or "rain shower") couldn't seep in. The tiles were, in effect, "rain tiles", so the Romans called them "imbrices" (singular "imbrex"). The verb for installing the tiles was "imbricare", and English speakers used its past participle "imbricatus" - to create "imbricate", which was first used as adjective meaning "overlapping" (like roof tiles) and later became a verb meaning "to overlap".

I like to think of water percolating down through the forest floor to moisten those interwoven plant roots and fungal threads.


The oldest living organisms in the world are probably the subterranean mycorrhiza of ancient forest fungi. They've been there since the woods sprang up, tens of thousands of years ago, and live in an intimate partnership with the tree roots, without which neither could survive.

A reminder to us that we can't survive without the plants, either.
SaveSave
Posted by parlance at 20:58 No comments: