sing a song about the apocalypse

I was musing about the word apocalypse - as one might do when reading the newspapers, these day - and began to wonder how it's related to the word calypso.

lit. "hidden, hider" (perhaps originally a death goddess) from Gk. kalyptein "to cover, conceal," from PIE *kel- "to cover, conceal, save". The W. Indian type of song is so called from 1934, of unknown origin or connection to the nymph.

For apocalypse, the same site says:

late 14c., "revelation, disclosure," from Church L. apocalypsis "revelation," from Gk. apokalyptein "uncover, disclose, reveal," from apo- "from" + kalyptein "to cover, conceal". The Christian end-of-the-world story is part of the revelation in John of Patmos' book "Apokalypsis" (a title rendered into English as "Apocalypse" c.1230 and "Revelations" by Wyclif c.1380). Its general sense in M.E. was "insight, vision; hallucination;" meaning "a cataclysmic event" is modern.

After finding a mention of the possibility that the word calypso for the musical form might be a folk etymology, I looked around and came across this suggested origin of the word, at eNotes.

It is thought that the name "calypso" was originally "kaiso," which is now believed to come from Efik "ka isu" 'go on!' and Ibibio "kaa iso" 'continue, go on,' used in urging someone on or in backing a contestant.[2] There is also a Trinidadian term, "cariso" which is used to refer to "old-time" calypsos.[3] The term "calypso" is recorded from the 1930s onwards.

Posted by parlance at 19:18 No comments:

origins of the word ostrich

After satisfied my curiosity about the origin of the word flamingo, as I played Birdwatching on Luminosity recently, I got to wondering about the word ostrich when I bagged one with my virtual camera.

(I can't be certain that playing Lumosity is helping to keep my brain active - I think it is - but it's definitely giving me words to blog about, so that's a win for me.)

Noun
*
1 a flightless swift-running African bird with a long neck, long legs, and two toes on each foot . It is the largest living bird, with males reaching a height of up to 2.75 m.
* Struthio camelus, the only member of the family Struthionidae
2 a person who refuses to face reality or accept facts:don’t be an ostrich when it comes to security systems[from the popular belief that ostriches bury their heads in the sand if pursued]

Which, of course, left me thinking, 'Wow! Those ancient Greeks didn't know the difference between a sparrow and an ostrich?'

An entry in freefictionbooks.org makes the interesting point that the word thus has its origins in both Greek and Latin.

The name "ostrich" has an interesting history. The Greeks called this singular bird _struthion'_. This came into the Latin language as _struthio_. In low Latin, _avis_, the Latin word for "bird," was prefixed to what remained of the Greek name, giving _avis struthio_. "Ostrich" is a contraction of this low Latin compound. So we have in this name a combination of two words from different languages, having the same meaning.

And I guess those Greeks could see the difference between a sparrow and an ostrich, by the way - they called it either 'big sparrow' or 'camel sparrow'. Online Etymology dictionary says:

ostrich
early 13c., from O.Fr. ostruce (Fr. autruche), from V.L. avis struthio, from L. avis "bird" (from PIE *awi- "bird") + L.L. struthio "ostrich," from Gk. strouthion "ostrich," from strouthos melage "big sparrow." The Greeks also knew the bird as strouthokamelos "camel-sparrow," for its long neck. Among its proverbial peculiarities are indiscriminate voracity (especially a habit of swallowing iron and stone to aid digestion), want of regard for its eggs, and a tendency to hide its head in the sand when pursued.

Like the Austridge, who hiding her little head, supposeth her great body obscured. [1623]

Ostriches do put their heads in the sand, but ostrich farmers say they do this in search of something to eat.

And I've learned a new word in the process - I found struthious [ˈstruːθɪəs] in The Free Dictionary
adj
1. (Life Sciences & Allied Applications / Animals) (of birds) related to or resembling the ostrich
2. (Life Sciences & Allied Applications / Animals) of, relating to, or designating all flightless (ratite) birds
[from Late Latin strūthiō, from Greek strouthiōn, from strouthos an ostrich]

Tonight as I played games on Lumosity, trying to keep my brain active, I scored a point for 'shooting' a flamingo - with a camera.

I remembered many years ago seeing a flock of these magnificent birds in Munich Zoo,

and I began to wonder about the origin of their name. Flamingo sounds like flaming.

There are two theories on the derivation of flamingo.

The word may come from the Latin word for flame, flamma, via Old Provencal flamenc. This could be based on the notion that when a flamingo takes flight, the flash if its crimson wings is like a burst of flame; or that when in heat haze, a flock of flamingos may resembled a fire.

The online Oxford Dictionary has the origin of flamingo as:

mid 16th century: from Spanish flamengo, earlier form of flamenco (see flamenco); associated, because of its colour, with Latin flamma 'a flame'

I followed the Oxford link to flamenco and found this noun defined as:

a style of Spanish music, played especially on the guitar and accompanied by singing and dancing.
a style of spirited, rhythmical dance performed to flamenco music, often with castanets.

Here's what the Online Etymology Dictionary says about the word flamenco:

1896, from Sp. flamenco, first used of Gypsy dancing in Andalusia. The word means "Fleming, native of Flanders" (Du. Vlaming) and also "flamingo." Speculation are varied and colorful about the connection between the bird, the people, and the gypsy dance of Andalusia. Spain ruled Flanders for many years, and King Carlos I brought with him to Madrid an entire Flemish court. One etymology suggests the dance was so called from the bright costumes and energetic movements, which the Spanish associated with Flanders; another is that Spaniards, especially Andalusians, like to name things by their opposites, and since the Flemish were tall and blond and the gypsies short and dark, the gypsies were called "Flemish;" others hold that flamenco was the general Spanish word for all foreigners, gypsies included; or that Flemish noblemen, bored with court life, took to partying with the gypsies.

I probably haven't explained any of this clearly, because I feel as if I've been running in circles. But at least I know that, whatever the roundabout route through European history they took, flamingo and flaming both derive from the Latin word flamma, meaning flame.

And just for a rest I'm going to look at these beautiful photos of flamingoes.

Posted by parlance at 18:38 No comments: 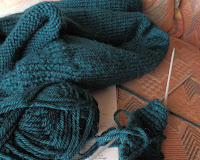 Long ago, when people didn't work on Sundays - or didn't dare be seen to work - my mum said if I knitted or sewed on Sunday I would pull it out with my nose in heaven. That didn't make heaven sound too inviting, so maybe I was going to do the pulling out in Purgatory. I can't remember the details.

Recently, I was reading one of my favorite blogs, by SF and fantasy writer Gitte Christensen, and she mentioned the word penelopise. This is Australian spelling, and all other references I could find online were penelopize. Penelope was definitely into pulling out her work. But not in heaven. And not with her nose, presumably.

What activity is it? Well, it depends on the reference you consult.

Wordnik defines it as a type of activity used to gain time:

To act like Penelope, the wife of Ulysses, when she was pressed by the suitors; pull work to pieces in order to do it over again, for the purpose of gaining time.

The Phrontistery, on the other hand limits the meaning:

to create work as an excuse to deter suitors

To me this misses the point, because it was in the pulling out that Penelope gained time.

Here's what Gitte said about the word:

the little known but very useful and possibly writerly relevant verb 'to penelopise' , meaning to undo one's work to gain time, derived from "Penelope", the wife of Odysseus. After the Greek hero was declared MIA whilst returning from the siege of Troy, many power hungry suitors approached his wife Penelope and pressed her to marry again. Certain that her hubby would return at any moment, she said she'd marry one of the suitors once she finished weaving a certain tapestry, but she would weave away all night and then undo her night's work in morning to keep the suitors hanging. Some scribes at the launch saw this as being a lot like writing all night only to hit the delete button come morning.

That sure rang true to me. The delete button....If I continually redraft (aka penelopise), I will never finish a story, so I won't be able to send it out, so no-one will reject it for publication. Hmm...I think there's a fallacy in this logic.
Posted by parlance at 13:06 No comments:

Today's email from A Word A Day was attaboy! (The focus this week is on interjections, those useful little words or phrases that act as a 'filler' and have no grammatical relationship to the rest of the sentence.)

I can't recall the last time I heard anyone use this interjection, but I know it was used in my family when I was growing up. Of couse, I preferred attagirl! seeing I'm female. I suppose the current household equivalent would be the frequent use of good girl! when my dog Penny earns some praise.

I'd have thought it was a typically Australian usage, but Word A Day is an American institution, so I guess it might be a more universal phrase than I realised.

The online Macquarie thesaurus (Australian) includes attaboy in a selection of interjections synonymous with well done!

good for you, good on you; Informal: (you) (little) beauty, attaboy, attagirl, beaut, bewdy, bully, bully for …, curl the (or a) mo, good egg, good iron, good show, great, man, nice one, onya, that's the shot, your blood's worth bottling;

I've never used onya as an interjection, but I have used good onya (meaning good on you).

A Word A Day emails include a quote or two to show the usage of the daily offering, and here are the quotes for attaboy:

"The employees are not asking for a whole lot -- just an Attaboy! or an Attagirl! And news of this small gesture moves like wildfire through the ranks."
Labonita Ghosh; Five Ways to Reward the B-player in Your Team; The Economic Times (New Delhi, India); Feb 1, 2011.

So...
the first quote shows the word is used in India and the second one shows it has morphed into a verb. Verbing is one of my favorite linguistic processes. As Mark Liberman on Language Log says, '... you can pretty much verb any noun you want to verb.' There are myriad examples of nouns used as verbs, from Shakespeare's day to today, but I don't know many examples of interjections as verbs. (I'm sure linguists know lots of them, lol.)
Posted by parlance at 19:08 No comments: