Over an enjoyable dinner tonight, one family member commented that it was good enough to be enjoyed by a gourmand. Wait a minute! Isn't a gourmand a greedy person? We weren't sure, so someone headed off from the table to get our battered old copy of The Australian Concise Oxford Dictionary. Sure enough, the word means a greedy feeder, a glutton. But the dictionary included a third meaning - gourmet.

So we looked up gourmet. And found it means a connoisseur of table delicacies, judge of good food. The surprising finding was that this word comes from French, meaning wine-taster, and the modern sense has been influenced by the old word gourmand.

We seemed to be going in circles at this stage, so I've looked on the internet.

gourmand
late 15c., "glutton," from M.Fr. gourmant "glutton," originally an adj., "gluttonous," of uncertain origin. Not connected with gourmet. Meaning "one fond of good eating" is from 1758.

So it seems as if the two words have completely different origins but one has influenced the other.

For gourmet, we read:

"connoisseur in eating and drinking," 1820, from Fr. gourmet, altered (by influence of M.Fr. gourmant "glutton") from O.Fr. groume, originally "wine-taster, wine merchant's servant" (in 13c. "a lad generally"), of uncertain origin. As an adjective from 1900. Cf. gourmand.

So, if I've understood it correctly, the Old French word for a lad - groume - became the word for a wine-taster (I wonder why?) and then acquired the meaning of a connoisseur of food in general and the somewhat similar word gourmand - glutton - caused people to start writing and saying groume as gourmet.I wonder how groume relates to the English word groom? But I guess that's another story.
Posted by parlance at 21:49 No comments:

origin of the word orange 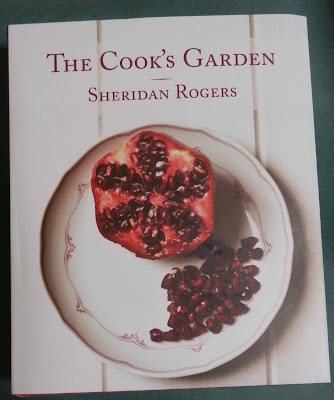 It's such a well-written book that I actually read it from page one to page 297, instead of browsing it as I originally intended.

I don't grow oranges, but I was interested to read Rogers' etymology of this name. 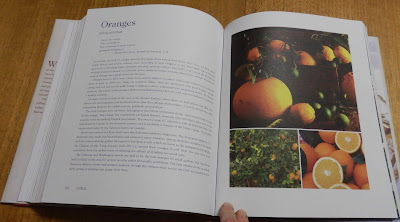 According to Jane Grigson, in her Fruit Book, the word itself goes back to Dravidian India, narayam meaning 'perfume within'. The Arabs took it from the Persians as narandj, Italians softened it to arancia and in medieval France arancia slipped into 'orange' because the town of Orange was a great centre for the fruit.

I find the evolution of words fascinating, so I had a look around the internet to see what others are saying.

The Online Etymology Dictionary has a similar early history for the word, but says:

Loss of initial n- probably due to confusion with definite article (e.g. une narange, una narancia), but perhaps influenced by Fr. or "gold."

It seems people don't agree where the modern word came from, though I would lean towards the migration of the letter 'n' because this happens so frequently, as in the loss of the 'n' in napron to become apron.

However, in the interest of fairness, I investigated the origin of the name of the town of Orange. Whew! That was tricky. There are so many towns with this name. One of them, here in Australia, was named after the Prince of Orange, so that explains why all sorts of fruit other than oranges are grown there. The town in France acquired its name from the old Roman word Arausio. which Wikipedia says came from the name of a Celtic water god.

Somewhere in all this to-ing and fro-ing around the internet I read that in Old English there was simply a word 'red-yellow' , until the word for the fruit arrived in Britain. All references I came across, such as this one, quote the Old English word as geoluhread, but I couldn't find an actual reference for this. However, the Oxford Dictionary of Word Origins says,* ' The name of the orange, first recorded in English in medieval times, goes back through Arabic to Persian, although the native home of the fruit may have been southeast Asia' so this seems to fit with what the other sites say.

And at last I came across a really interesting post about the history of many color words and it agreed with the idea that the town's name influenced the fruit's name.

The colour orange derives originally from the Sanskrit word narangah for the fruit, whose name moved westwards through Persian narang and Arabic naranj to Spanish (the Arabs imported it into Europe via Moorish Spain in medieval times); in French it became corrupted to orange, in part by the process called metanalysis but also through being strongly influenced by the name of the town of Orange in south-eastern France which used to be a centre of the orange trade.

All very interesting - to me, at least, lol.

I don't know why I'm thinking about polka dots lately. But I am. I suppose I must have seen the words somewhere without consciously registering them and they're circling in my brain. Maybe dancing a polka.

I thought the fabric pattern polka dot and the polka dance would turn out to have some convoluted history that linked them, but it turns out it's ultra simple. There was a craze for this dance in the nineteenth century and when the dance reached America, manufacturers jumped on the bandwagon, naming all sorts of products after it. It seems that polka gauze, polka hats and polka cakes aren't with us any longer, but the dots are.

Fledermaus suggests that Johann Strauss added the word Popular to the title of his 1842 Anna Polka in a deliberate strategy to launch this form as the new dance sensation. If so, it appears to have worked.

The polka was such a hit in the 1840s that the word polka was attached to the names of many products sold. There was no connection to the dance at all, and nothing very different about them, but entrepreneurs saw a good way to make a buck from its popularity by adding the word “polka” to an array of goods. There were polka hats, polka fans, polka cakes, polka hairstyles and polka curtain ties. A new fabric print was introduced that featured symmetrical placement of dots throughout the material. This was dubbed polka dot style and it is the only one of these “polka” products to have maintained its name to the present day, undoubtedly due to the fact that it was a new, unique product. The name polka dot stuck.

Everybodyeverywear has an overview of the history of this fabric, and includes interesting information from Martha Stewart and Christian Dior.

I've missed out on being fashionable by only twelve months. This time last year, seemingly, polka dots were featuring on the catwalks. But I'm too old to be fashionable, anyway - old enough to remember when we were all singing about that itsy bitsy yellow bikini.

why are they calling me ma'am?

What's going on? I thought this was Australia. Since when are women here addressed as ma'am? I've heard it twice in two days.

to call a woman "ma'am," especially when she is (or thinks she is) way too young to be considered one.
(some twenty-something): oh my god, that waiter just ma'amed me.
(a friend): ha ha, you got ma'amed by a guy twice your age!

Well, that might be an American definition of this new verb, but my personal Australian definition of ma'aming someone - ie using the word inappropriately - is to use it anywhere, anytime, in Australia.

As far as I'm concerned ,
it's sexist,
it distances the speaker from the woman being so addressed,
and it's not Australian English.

The first occasion was when a guy came to our home to give us a special electric plug that's supposed to save energy by turning our television off standby.( And that's another story.) I felt that if he addressed me as ma'am one more time I would have to throw him out of my loungeroom. So I'm a woman. Does that mean I'm incapable of understanding technology? I can't put my finger on the reason why, but the word had a demoralising effect on me.

And the second occasion...

Today, an older lady, probably in her late seventies, tripped and fell down in a local nursery. Two young men looked after her, but I stayed to help, as it's good to have another woman with you when you've lying flat on your back in the middle of a busy area where trucks and cars are driving around you. The youngsters were kind, if a bit taken aback by having to care for the woman instead of hauling heavy bags of sand and mulch. They got her up on a chair, gave her a cup of tea, fed her a lolly for the sugar input.

And then they started to call her ma'am.

To me that was the point when they stood back from her psychologically. They had done all they could and she seemed okay to them and that moment of togetherness was past.

I hate the word ma'am and I'm going to challenge anyone who addresses me that way.

Like Senator Barbara Boxer did.
Posted by parlance at 20:24 6 comments:

ascultation of a dog's gut

Arriving home recently after a somewhat worrying visit to the vet, I took a moment to enjoy a new word.

Ascultation.
There it was in the consultation notes.

Hmm... he'd been listening to my dog's gut through his stethoscope and I seem to recall I heard the Italian teacher at school, when she wanted a child to listen to her, say something like: "ascolta!'

So, it must mean listening.

Over to the Online Etymology Dictionary and there it was:

I'll have to think of a reason to use it soon. Not that I want to go back to the vet.
Posted by parlance at 22:14 2 comments: